A. Thank you. Don't mention it
B. You're welcome
C. Not so delicious, I'm afraid
D. I'm glad you enjoyed it

2. [单选题]Wood carving refers to the art of creating or decorating objects of wood by carving with a sharp, hand-held tool. This form. of art has a history of over 1,000 years and a unique artistic style. The following is some introduction about wood carving in America.

A. Wood carving began as a necessity in America and developed into an art. Because of the lack of other materials, early settlers were forced to make tools and utensils out of wood. At first, these articles were whittled with a knife, but when pioneer craftsmen set up their primitive shops most of them were fashioned on a lathe--a machine which holds an object and rotates it while it is being shaped by a tool.
B. However, even after Massachusetts-born Thomas Blancard designed a lathe which could turn irregular shapes--an innovation that made possible mass production of gunstocks, shoe lasts, oblong and square wooden wares--craftsmen who could use knife and chisel skillfully were still in demand. Some found ready employment in shops of cabinetmakers, while others, carved decoy. Still others specialized in creating shop signs, ship figureheads, or in decorating interior woodwork. A few even accepted commissions to make busts of prominent citizens.
C. This passage most likely came from a longer work about early American ______.
D. arts and crafts
E. political leaders
F. logging industries
G. fashion design

A. easily satisfied
B. not always hopeful
C. sure to succeed
D. not interested in free food

A. the upper part of one's body
B. self-portrait
C. painting
D. clothes

7. [单选题]Most of the people who appear most often and most gloriously in the history books are great conquerors and generals and soldiers, whereas the people who really helped civilization forward are often never mentioned at all. We do not know who first set a broken leg, or launched a seaworthy boat, or calculated the【31】of the year, or manured a field; but we know【32】about the killers and destroyers. People think a great deal of them, so【33】so that on all the highest pillars in the great cities of the world you will find the figure of a conqueror or a general or a soldier. And I think most people believe that the greatest countries are【34】that have beaten in battle the greatest number of other countries and ruled over them as conquerors. It is just possible they are,【35】they are not the most civilized. Animals fight; so do savages; hence to be good at fighting is to be good in the way in【36】an animal or a savage is good, but it is not to be civilized. Even being good at getting other people to fight for you and【37】them how to do it most efficiently — this, after all, is【38】conquerors and generals have done -- is not being civilized. People fight to settle quarrels. Fighting means killing, and civilized peoples ought to be able to find some way of settling their disputes other【39】by seeing which side can kill off the greater number of other side, and then【40】that that side which has killed most has won.

9. [单选题]What should you do ff your child is under six years old?

A. You should let him take two tablets a day.
B. You should reduce the dosage anyway.
C. You should find the directions on the bottle.
D. You should ask the doctor for advice. 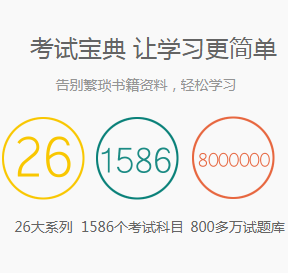